A land deal that’s been two years and as many contracts in the making has cleared the way for hundreds of new apartments near Virginia Union University.

MVP Equities closed Jan. 20 on the site of its planned Sphere Apartments, a 224-unit complex to be fitted between the Brook Road post office and adjacent Spectrum apartments.

The McLean-based private equity firm paid $3 million for the roughly 4-acre site, which consists of two parcels at 2009 Brook Road and 2011 Northumberland Ave. The development would replace a U.S. Postal Service warehouse on the site.

MVP had been under contract to purchase the site since last summer. It had previously put the property under a separate contract months before, but that deal fell through with the arrival of the pandemic. The project was shopped around to developers before MVP put it under contract again in July.

The $34 million project will be MVP’s first in the Richmond market. Totaling 185,000 square feet, Sphere is planned to consist of 37 studio apartments, 90 one-bedroom units with one bathroom, and 73 two-bedroom, two-bath units. Monthly rents are planned to range from $950 to $1,400. 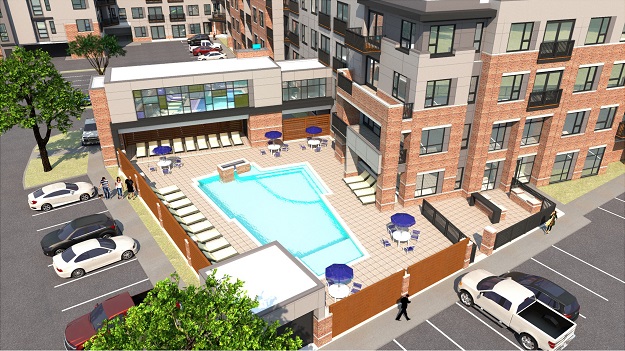 The proposed apartment complex would include a pool and other amenities.

The garden-style apartments would fill two four-story buildings with amenities including elevators, a pool, a fitness center, a dog park, a bike maintenance facility and on-site storage. The project also would include a parking lot with 301 spaces free to residents, as well as 21 covered spaces that can be rented for $65 a month, according to MVP’s website.

MVP will develop the apartments with Richmond-based Hourigan selected as general contractor. The apartments were designed by Virginia Beach-based architect Cox, Kliewer & Co., one of several firms tied to the project when it went through the city’s permitting process.

MVP CEO Kevin Palka said construction is scheduled to start in March. He said the 18-month project should be completed in September 2022.